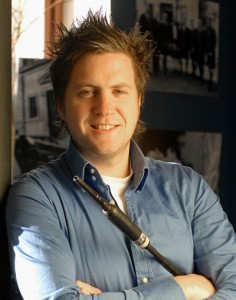 Finlay MacDonald has blazed a trail as one of the country’s finest exponents of contemporary and traditional Piping. He has worked with many leading artists in the traditional music scene including Fred Morrison, The Unusual Suspects, La Banda Europa, Old Blind Dogs and Chris Stout. He combines the mastery and dedication of traditional Piping with a true sense of musical adventure and creative collaboration producing a unique musical voice which can be heard on numerous recordings and projects. His Compositions and arrangements have been played by many leading artists including The World Champions, Field Marshal Montgomery Pipe Band.?Always driven by collaboration and innovation,Finlay’s passion for the music he has grown up with has led him to the post of “Head of Piping Studies” at the National Piping Centre and the Royal Conservatoire of Scotland where he continues to inspire and develop the very best of new Piping talent.

“Finlay MacDonald has emerged as one of the leading lights in the current crop of young pipers with deep roots in the pipe band tradition, but grafted on to a distinctly contemporary musical sensibility to produce a compelling hybrid.”?Kenny Matheison, The Scotsman 12/5/07